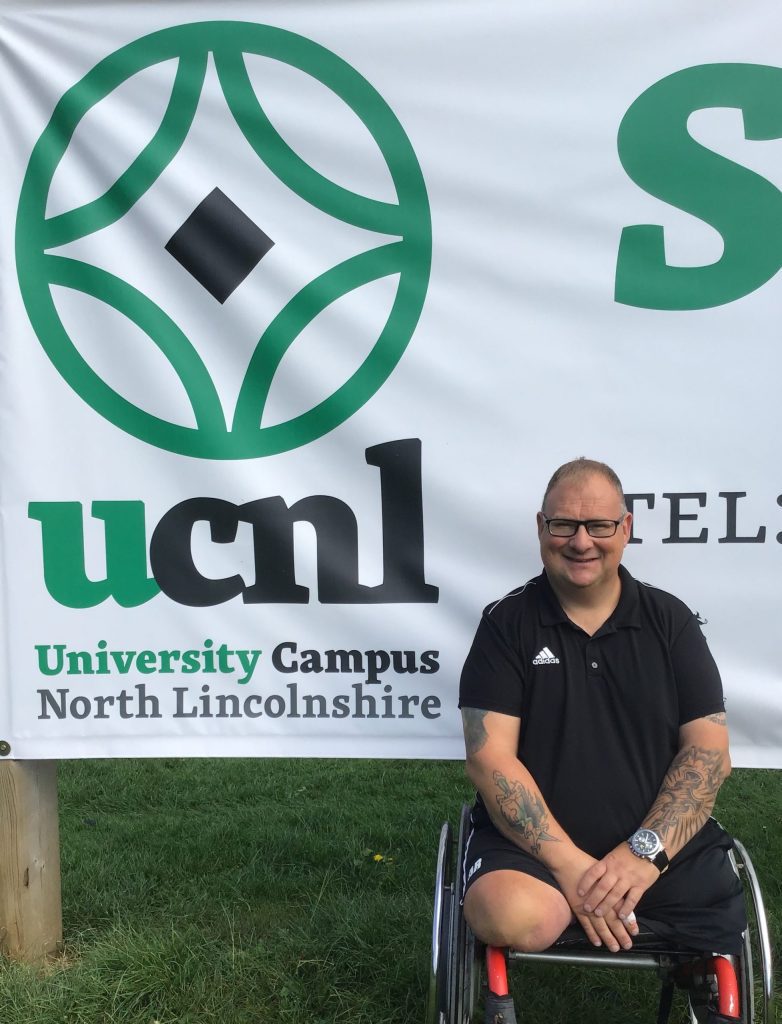 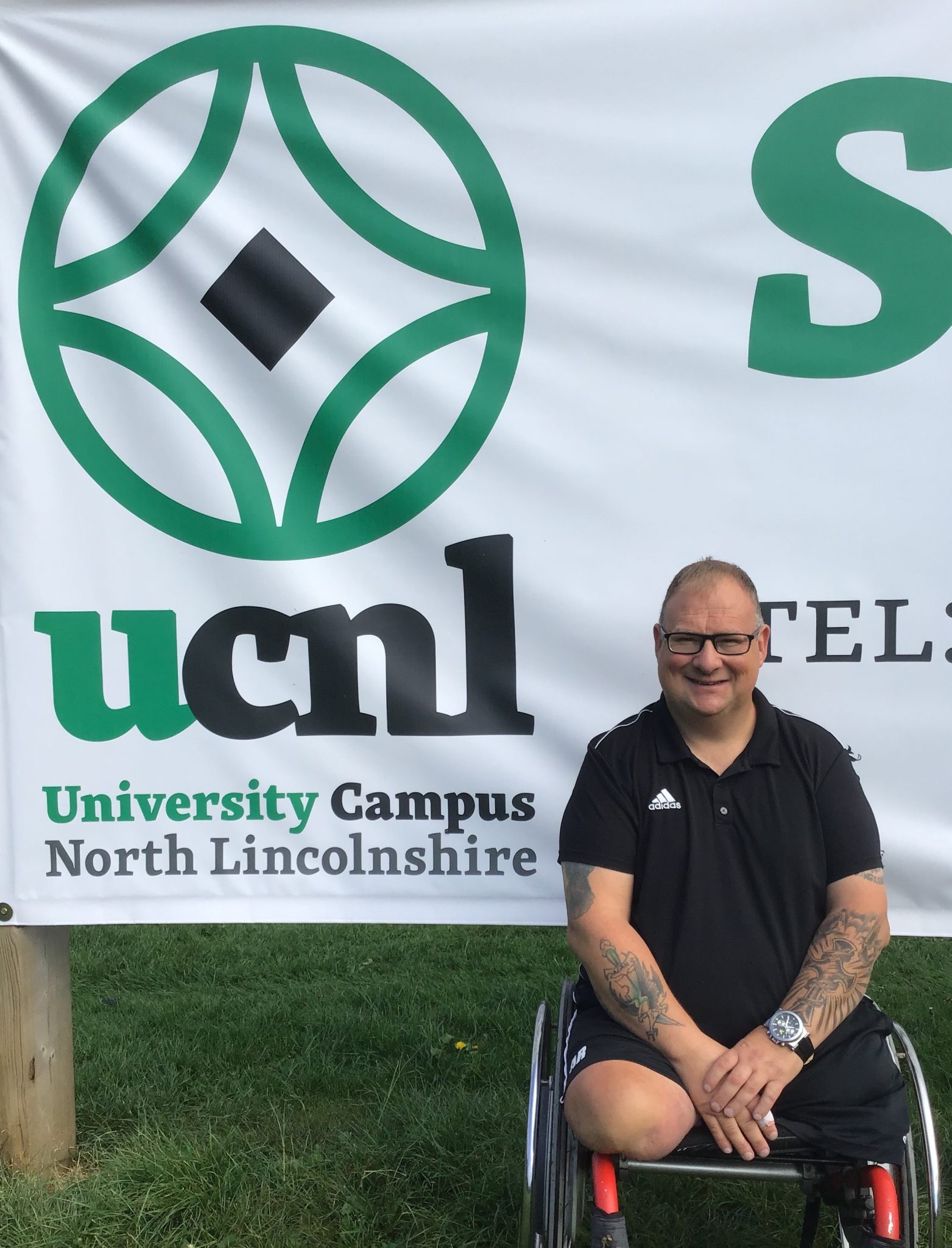 Enrolling on a UCNL course became the turning point for a student’s relationship with pain.

Alan Rayment (age 46) became his own therapist after being inspired to use his new-found skills, gained at the UCNL, in therapy to change his life for good.

Alan has faced many obstacles in his life but has been amazed by the impact enrolling on a counselling course at the UCNL has had on his life. Alan is a bilateral amputee, who had both legs amputated due to leg ulcers and MRSA in 1997 and then in 1998.

For 24 years Alan has suffered with phantom leg pain and has relied on medication to help cope with the pain. Alan said: “It felt like my leg was burning, my toes were twitching all the time. I wore compression stockings, used hot and cold therapy nothing worked all the Drs advised was take more medication this was not the answer. If I ever missed taking the medication, it impacted on my sleeping pattern that night. I would wake up early in the morning feeling my feet, I would sit and massage, apply a hot water bottle or have a bath before reaching for more medication, I was reliant on the tablets. The next morning I would feel horrendous, so tired and drowsy from the medication, I had to break this cycle as I was suffering.”

In September 2019 Alan started his learning journey on an Fda in Counselling to become his own therapist to help with his condition. He started to learn about Cognitive Behavioural Therapy (CBT), he worked in a triad and one of his peers became his counsellor. He wanted to bring real-life experience to the sessions and they discussed his health. He explained how drained he felt at times, waking up with phantom leg pain resulting in some nights only getting three or four hours sleep. He has always remained positive throughout but knew it was time to try and stop taking the medication.

Alan said, “I had to reduce the medication week-by-week, I was expecting more sleepless nights and tough days. In our weekly counselling sessions we introduced mindfulness and grounding techniques to bring me back to the here and now. The first few weeks I was up at 2am, I could not sleep and thought is this worth it, I knew deep down it was. I would sit in bed and complete my mindfulness session, also rubbing my thumb and finger together to distract the pain. I then introduced a weighted blanket, it felt heavy although the weight helped with the pain it made me feel I had legs.”

Alan continued: “In our weekly sessions I would feedback what I had written in my thought diary, interestingly I wrote I was going to be successful and break this cycle. I finally reduced the medication to only taking one tablet on an evening I was reluctant to stop all together, but I did. The whole process had taken four months of hard work and commitment. I had introduced self-care strategies music, more exercise and relaxing more than usual and having long soaks in the bath. Previously I only ever introduced self-care when I was near burnout, now it is integrated in my life daily. All the new skills I had learnt on the course were now being introduced into my life, I had done it, I was off the medication, I had become my own therapist!

Despite his continuous battle with pain, Alan has achieved many great things in his life which has included: completing the London Marathon, Great North Run, hand cycled from Land’s End to John O’Groats, collected medals at National, European and at World level for Team GB Para Triathlon squad.

Alan stated, “I would say stopping this medication is the biggest obstacle I have beaten. I feel so much better in a morning, not drowsy ready to face the day and all this is down to integrating what I have learnt on my course.”

Alan continued: “I chose UCNL due to it being on our doorstep and I had heard good reports of the lecturing. I wanted to study counselling as I see this as a career that I would be able to do sat in my wheelchair at retirement age. Over the years I have helped lots of people and last year I completed my coaching qualification then to further this completed 100 Counselling at DN Colleges. I have a passion to help others and I am now volunteering for Cruse Bereavement Services.”

Alan is now a Level 5 Counsellor and is looking forward to helping others. He stated: “Therapy has changed my life; I wish I had done it a long time ago. I have two sayings ‘everything is possible’ and ‘it’s all about the motivation’ I am evidence that with hard work and dedication you can make a difference.

“I must say thanks to Zoe, my peer, for the help she gave me, those weekly sessions have made a difference. My message to others would be persevere in what you want to achieve, believe in therapy, be open minded and positive. The university lecturers were outstanding, my learning journey has been outstanding.”